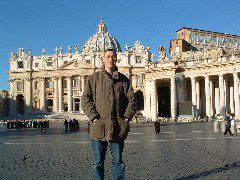 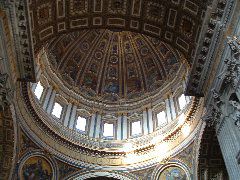 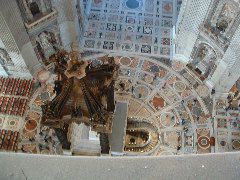 on the feast of St Agnes

on Wednesday, 21 January 2004 at 8.20 pm by Simon Kershaw
categorised as reflection 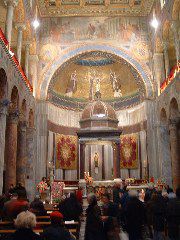 Today we visited the church of Sant’Agnese fuori le Mura — St Agnes outside the Walls. It’s the feast day of St Agnes, a young girl of 12 or 13, who was killed in Rome for her Christian faith near the end of the persecution under the Emperor Diocletian, around the year 304. This is the church where she is buried, and a great service is held in this church on this her feast day.

At the start, two tiny (live) lambs, garlanded and bedecked with flowers are carried into the church on trays and placed on the altar. They are blessed, and then, during the Gloria, carried out in procession, and away to a convent. When they are old enough to be shorn, their wool is woven into the palliums which the Pope gives to all Roman Catholic Archbishops (as a symbol of their metropolitan jurisdiction). 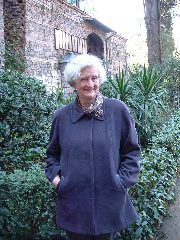 Here we worshipped; here we prayed, at this place (as Eliot wrote about Little Gidding) where prayer has been valid; to stand and pray at the shrine of this young girl, martyred for her faith 1700 years ago today; to stand and pray with this young girl and for this young girl, who surrendered her life rather than offer incense and prayers to pagan gods; to stand and pray with the countless numbers who down the centuries have stood in this same place, before the tomb-chest of Agnes, and who have similarly offered their prayers — this is a moving experience, although one rather wonders what she would have made of the great church and the great service held in her name, let alone the incense offered at the altar over her tomb!

Unity, Rome and all that

The Confession of Peter is kept on a date observed in the calendar of the Roman Catholic Church as ‘the Chair of Peter’, which commemorates the arrival of Peter in Rome, the date from which Roman Catholics account him as the first Bishop of Rome, the first Pope (the ‘Chair’ is the cathedra, or chair from which a bishop teaches in their cathedral church — the traditional Chair of St Peter is enshrined in a magnificent baroque monument by Bernini at the west end of St Peter’s Basilica in the Vatican). This feast has been commemorated in Rome from the earliest times, and the gospel reading for the day is traditionally the acclamation by Peter of Jesus as the Messiah, the Son of the living God (Matthew 16.16). It is this confession of faith which gives its name to the feast as commemorated by some Anglicans.

The Conversion of Paul, of course, commemorates the event described in the Acts of the Apostles (Acts 9.1-9), where Paul, journeying to Damascus to persecute the early Christians, is waylaid by a blinding light, and called to serve Christ, whom he has been persecuting.

During the Week of Prayer I shall be spending some time in Rome. I hope to be able to pray at the tomb of St Peter, and to visit also the basilica of St Paul. Here are some of the ancient memorials of the Christian faith. I hope also to be present at an audience with the Pope, the Bishop of Rome. Even though Anglicans are not in communion with the See of Rome, it is that unity — along with unity with our other separated brothers and sisters — for which we pray most especially next week.

As Anglicans, we have long considered ourselves to represent the Via Media. Historically this has meant the ‘middle way’ between the ‘extremes’ of Geneva and Rome, between extreme Protestantism and extreme papalism. Over the last hundred years or so it has perhaps been expressed in the Lambeth Quadrilateral, emphasising our gathering around the fourfold points of the bible (as containing all things necessary to salvation), the sacraments of baptism and the eucharist, the liturgy of the Book of Common Prayer, and government by bishops, suitably adapted to different places. We have, perhaps, seen ourselves as a possible model of unity without uniformity, a communion of self-governing Churches, not beholden to one another, nor governed by one another, each expressing the essentials of the Christian faith in its own area. Each Church too has provided ways in which the bishop of a diocese can take counsel with representatives of all their people, laity and clergy alike. This was an important part of the English Reformation, led by the bishops and enacted by the people in Parliament, and it was a principle further developed by the American Church, and then in synodical government in New Zealand and elsewhere. All these have been important contributions by Anglicans to our understanding of the Church — both of our own Church and as a vision of a wider, united Church. Unity not uniformity.

In our time we seem to be straining at the bonds of unity which tie us to each other, to our bishops and to the Archbishop of Canterbury. In this Week of Prayer for Christian Unity let us not forget to pray for all our fellow Anglicans — that our communion may not be fragmented — as well as for reunion with those with whom we are not currently in communion.

May we all be one, that the world may believe.